Bollywood Celebrities proved that social distancing is temporary but love is forever as few of them took the plunge and got married to their loved ones even surpassing the hurdles of Covid times and lockdown. After dating for few years, our favorite B-town celebrities decided to take their love to another level by taking the wedding vows. Their Fairytale weddings made their fans go crazy. From Varun Dhawan to Ranbir Kapoor, here’s a list of 10 famous Bollywood weddings during Covid times that left us in awe.

The most awaited wedding of 2022, actress Alia Bhatt and actor Ranbir Kapoor dated for almost five years before getting married. Rather than choosing a lavish destination for their wedding, the couple decided to tie the knot at their Vastu home in Mumbai on 14th April, 2022. Their wedding pictures have taken the internet by storm. The couple was seen playfully exchanging varmalas and a quick kiss. 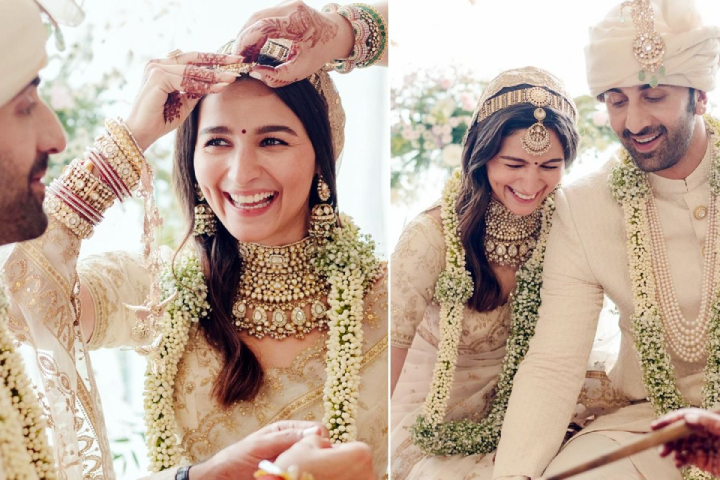 Bollywood sweethearts Vicky Kaushal and Katrina Kaif tied the knot on 9th December, 2021. Their wedding took place at the royal hotel Six Senses Fort Barwara, Sawai Madhopur. Both decided to opt for custom made Sabyasachi attires. Their wedding pictures went viral on the social media even before they officially posted them on their Instagram profiles. After their wedding, the couple flew to an undisclosed location for their honeymoon. 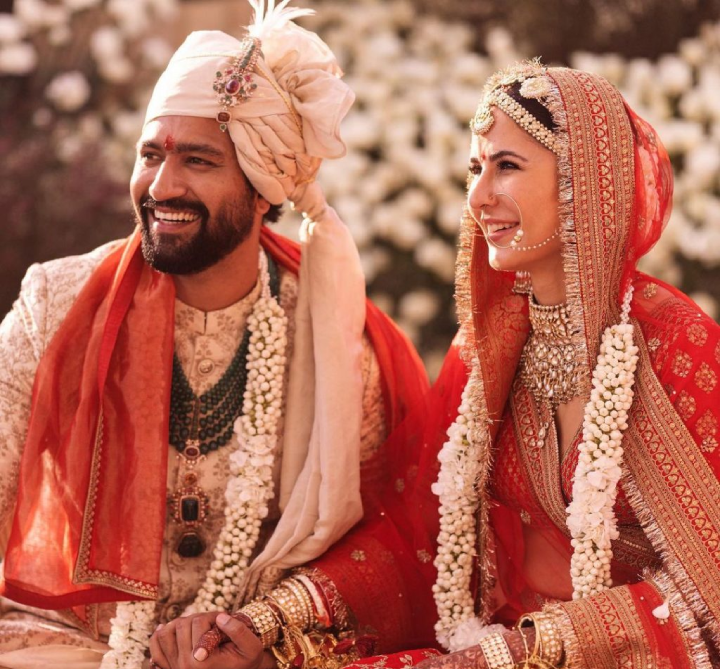 Everyone’s Favorite actor Varun Dhawan married his long time girlfriend, designer Natasha Dalal at an intimate ceremony in Alibaug, Maharashtra. The couple tied the knot on 24 January, 2021. Actor Varun Dhawan took to Instagram to introduce his better half aka wife to the world.

After dating for 11 long years, actor Rajkumar Rao and Patralekhaa got married in Chandigarh on 15th November, 2021. Their destination wedding took place at The Oberoi Sukhvilas Spa Resort. The Couple wanted to keep their wedding small and private because of Covid. Their wedding pictures made their fans go crazy. 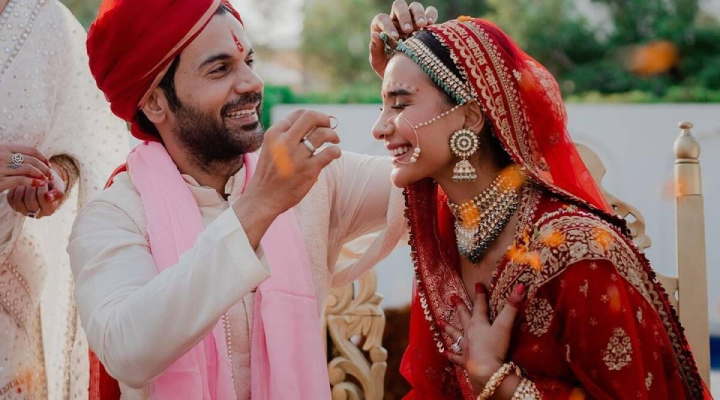 Bollywood actress Yami Gautam started her new life with filmmaker Aditya Dhar in Mandi, Himachal Pradesh. Their wedding pictures went viral on social media and their wedding was appreciated by everyone for its simplicity and grace. Yami decided to opt for her mother’s saree as her bridal attire, along with pahadi nath and dupatta given by her grandmother. On being asked, Yami revealed that their love story started during Uri promotions. 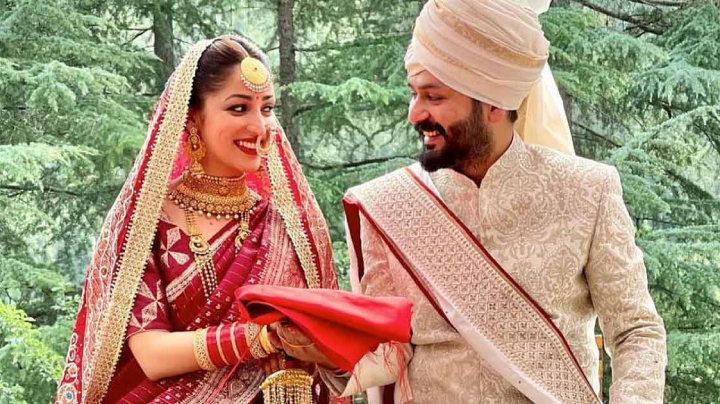 Bollywood actor Farhan Akhtar who was earlier married to Adhuna Bhabani, is now married to his long time girlfriend Shibani Dandekar. The couple started dating after Farhan’s Divorce with his first wife. They both got married in an intimate wedding ceremony on 19th Febraury, 2022 at Shabana Azmi and Javed Akhtar’s Khandala Farmhouse. 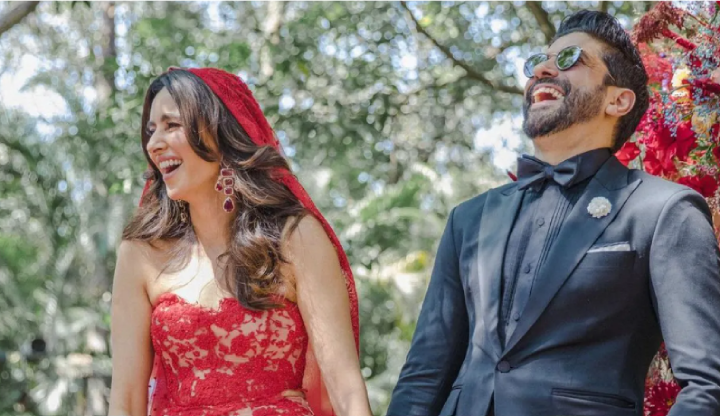 Bollywood actress Mouni Roy married her long time boyfriend Suraj Nambiar in Goa. The couple shared a strong relationship for years. They got married as per Bengali and South Indian traditions. They decided to make their relationship official in January this year (27th January, 2022). Their wedding was a close-knit event with only close friends and family members being invited to the festivities. 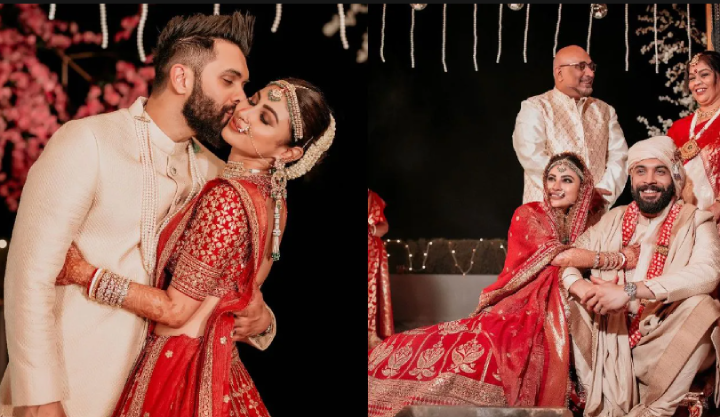 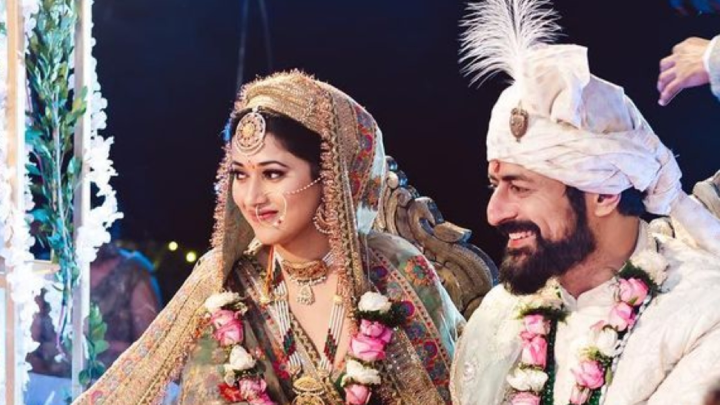 Pavitra Rishta fame Ankita Lokhande married her long time boyfriend Vicky Jain on 14th December, 2021 in Mumbai. They had an amazing traditional Maharashtrian pre-wedding ceremony. The wedding ceremony was attended by family and close friends from the industry due to strict Covid restriction. The bride and groom took their vows under the mandap decorated with white and red flowers. 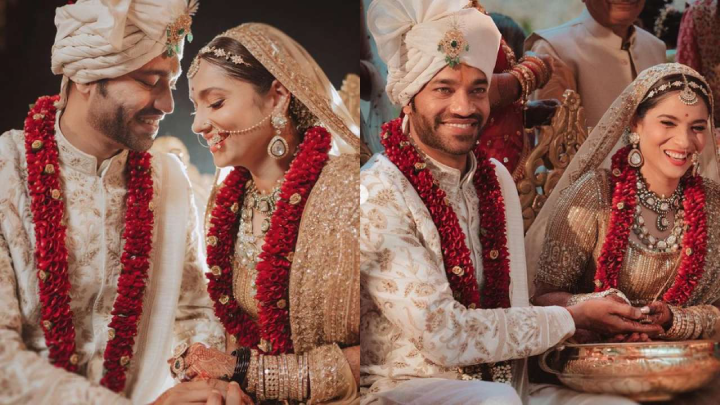 Producer Rhea Kapoor decided to tie the knot with her long time boyfriend Karan Boolani. Their wedding took place at Bollywood actor Anil Kapoor’s residence in Juhu, Mumbai. They got married in an intimate wedding ceremony on 14th August 2021 in the presence of few friends and family members. 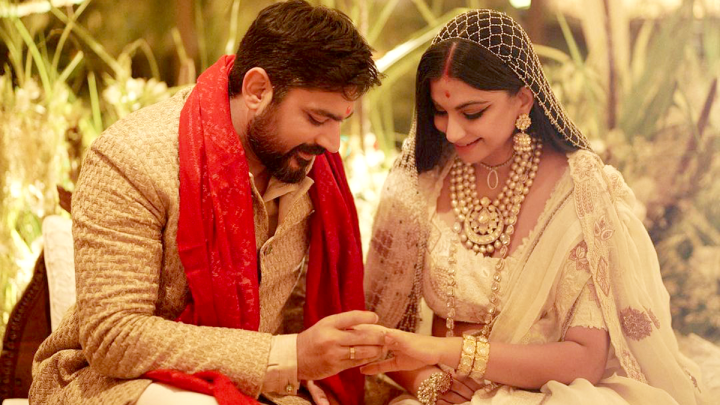 Hope you found this article interesting. Which latest Bollywood celebrity couple’s wedding did you love the most? Feel free to share your opinions in the comments section.